The Planning and Trees Committee currently comprises three Parish Councillors (Chris Davis, Simon Barnes, Emma Monk), with a reserve (Nicky Bowler),  and one Parish Councillor (Howard Millett) as Tree Representative. The Committee operates in accordance with its Terms of Reference as approved by the full Sway Parish Council. It meets on the second Thursday of every month at the Jubilee Field Pavilion, Station Road, Sway at 7:15pm.

Plans and applications are available to view through the Planning Authority's portal at https://www.newforestnpa.gov.uk/planning_category/view-or-comment-on-applications/. Everyone is welcome.

Sway Parish Council is not the planning authority for Sway.  Our Planning Authority is the New Forest National Park Authority - in particular see their planning pages.

The Planning and Trees Committee will decide on one of the following options to pass back to the NFNPA planning officer:

If the Planning and Trees Committee recommendation is contrary to that of the NFNPA planning officer, then the planning application is passed on to the NFNPA Planning  Committee for its decision.

Sway Parish Council's Planning and Trees Committee meetings are fairly informal and we try to enable members of the public to speak to applications on the Agenda. Here is a useful introduction for Sway residents PaTC Introduction

Trees are vital to our world. They play an important role in combating climate change and are a haven for wildlife. Many trees are protected with a Tree Preservation Order (TPO) issued on them; any work required on them has to be submitted to the NFNPA tree team for consideration as a Tree Works Order (TWO). They, in turn, invite Sway PC to comment which we do in a fair and unbiased way.
Sway is responsible for over 200 trees in the parish, and we undertake annual surveys and management works to keep them healthy and safe. In 2020 we adopted a Tree Management Plan with a local arboriculturist, so that we can protect the long term health of our trees and proactively plant and take other positive steps where possible.

Sway Parish Council is not the Transport and Roads authority for Sway. For contact details of the various organisations responsible, please refer to the Contacts: Getting things done page of this website.

Sway Parish Council will approach the relevant authority in matters that are of significant concern to the Parish.

Responsibility for Hedges and Ditches generally resides with the owner of the adjacent property. In some cases where an overgrown hedge or blocked ditch is causing serious inconvenience or danger, then Sway Parish Council may write to the owner, and in extreme cases may report the problem to Hampshire County Council to take action.

Sway Parish Council is not responsible for the footpaths in Sway - that is the responsibility of the highways authority, which in our case is Hampshire County Council, and the landowner.  For Rights of Way footpaths see the HCC Rights of Way site starting at http://www3.hants.gov.uk/row.htm (Opens in a new window).

However as well as the general public being invited to comment on any Rights of Way issues Sway Parish Council also try to keep a weather eye on the footpaths in our Parish. That task is currently undertaken by various councillors.

Footpaths should not be confused with footways at the side of a road - like a pavement for example.  Sway has 15 formal Rights of Way: 9 footpaths, 3 bridleways and 3 byways open to all traffic. Six of these continue into Hordle Parish, and one continues into the parish of Lymington & Pennington (where those will also appear with a different number in the lists of those other parishes). One bridleway leads directly into the open forest in Brockenhurst parish, and two bridleways are essentially forest routes over railway footbridges. The definitive statement for Sway is in pdf format under Sway on the pages numbered 87 to 89 of http://www.hants.gov.uk/rh/row/s.pdf (Opens in a new window) or for an overall picture, click on the map above. 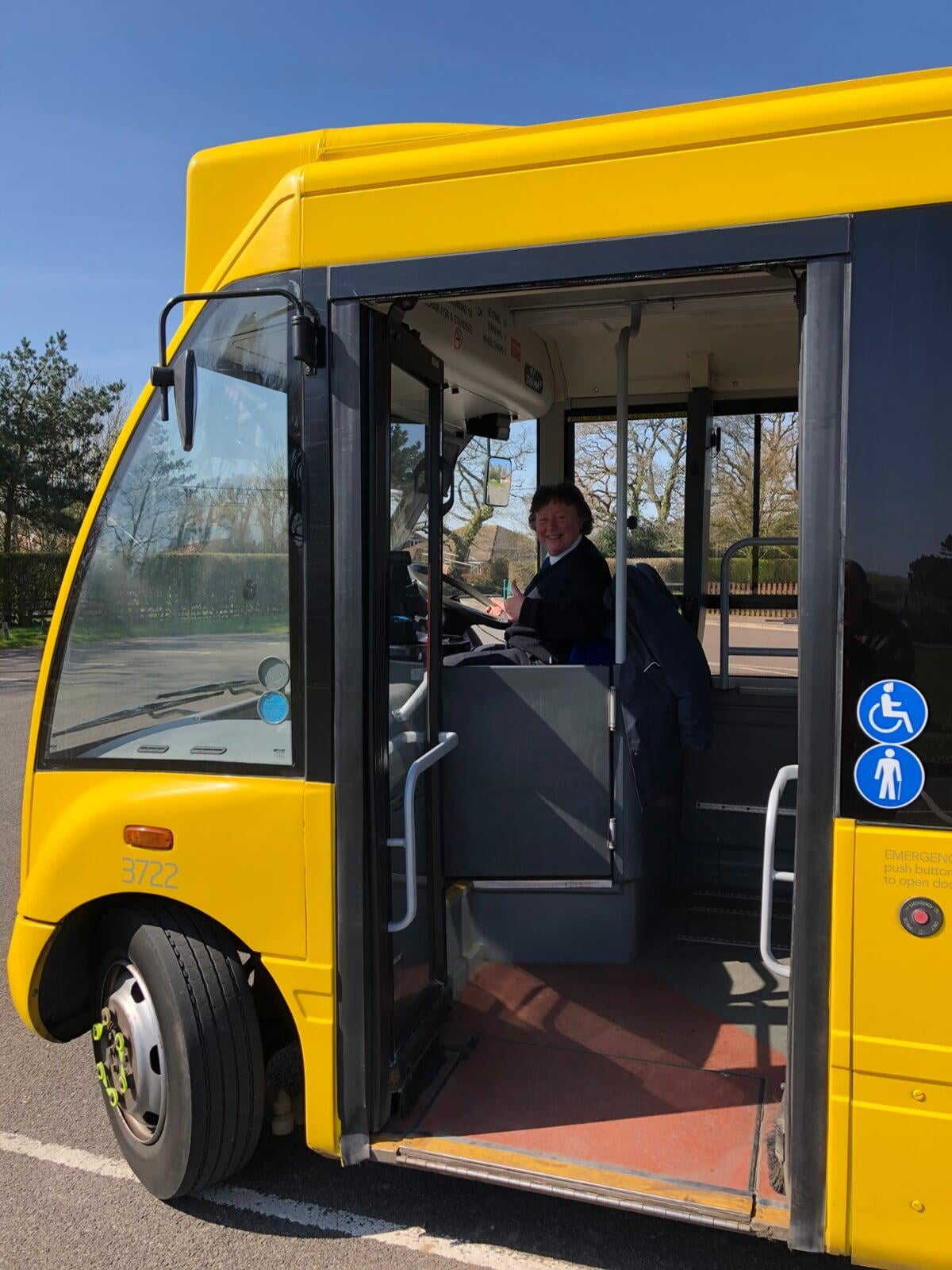 The New Forest Cango bus services C32 and C33 are subsidised by Hampshire County Council. These buses run on a flexible route within what are called Roam Zones. They have fixed start and end points along with a few other stops termed Timed Stops. Anybody can travel on the Cango buses between Timed Stops but you need to book your ride if you want to be picked up or dropped off at any other location. Registration and Booking line 07891 658769 is open 7am to 9am Mon-Fri. For full details click here . The Cango Users Forum Chairman, John Warden, regularly provides a report on passenger numbers and other relevant information about the service.

Since April 2014 the police support volunteers of Sway Community Speed Watch have been performing speed surveys at locations around Sway Parish that have been authorised by the police. The Speed Indicator Device (SID) is shared between Sway Parish Council, Boldre Parish Council, Lymington and Pennington Town Council and New Milton Town Council who each covered one quarter of the cost. Latest results for Sway are reported back to Sway Parish Council and published on the Sway Community Speedwatch website at https://swaycsw.weebly.com/.

​​​​​Consideration of a Neighbourhood Plan

Over the previous four years or so the NFNPA has been working towards a new Local Plan, and Sway Parish Council and local residents have commented at every stage, three major contributions being:  the response to the Local Plan Call for Views Oct 2015 (pdf); the response to the Draft Local Plan Nov 2016 (pdf) ;  and the response to the Submission Draft Local Plan Feb 2018 (pdf).  Initially Sway suggested a limit on the size of new dwellings;  and also influenced changes in: the protection of hedges, increasing car parking for shops and commercial buildings, limiting outbuildings, increasing affordable housing, maintaining the 400m zone, ensuring mitigation and contributions from developers, and alleviating parking congestion.  Sway Parish Council continued to contribute vigorously through a number of further rounds of refinement and consultation culminating in five Sway Parish Councillors attended and speaking at the two-week long public examination by government Planning Inspectors – see details linked from here.   The final NFNPA Local Plan 2016-2036 was adopted in August 2019 and is available here as a pdf.

3.Meeting with the NFNPA 2019
In November 2019 Sway Parish Council and the Parish Clerk met with: David Illsley (the NFNPA Policy Manager - and essentially the author of the NFNPA Local Plan and a few thousand pages of the hard evidence to support it); Claire Wolff (NFNPA Planning Officer with a particular expertise in community engagement); and Melanie Seacombe – the author of the Sway Village Design Statement - and also a previous Sway Parish Councillor.

We’d previously had input from Ted Watts, Convenor of the Sway VDS, an extended opportunity to peruse the Neighbourhood Plan Road Map and other documents linked above, and one Councillor had a fuller opportunity to consult the book ‘Neighbourhood Planning in Practice’.  The Parish Clerk had passed on comments from other Clerks; and one Councillor had collated possible questions and discussion points and circulated those to all concerned.

There was extensive discussion for a couple of hours – concentrating on getting good advice from the three visitors – and they responded generously and helpfully giving us the balanced facts and the benefits of their experiences and knowledge, but little direction.  The visitors then left with our thanks and the Parish Council discussed matters.

Through the meeting we noted (inter alia and in random order):

4.Towards a Sway Parish Design Statement
Overwhelmingly Parish Councillors and the Parish Clerk felt that an update to the VDS – perhaps as a Parish Design Statement (PDS)  – was the best option, for many of the reasons noted above.  On balance the cost in time, effort and cash to produce a Neighbourhood Plan could not be justified by the limited benefits that we could expect.  It was also noted that if things changed there’s nothing to prevent Sway returning to a Neighbourhood Plan later on.

There was a spectrum of opinion from some who felt a really thorough professionally driven consultation costing perhaps £10K would be a pre-requisite, through to some who felt the £600 sort of survey we carried out last time for the VDS would be more appropriate for a small Parish Council.   We did generally agree that combining a number of issues and strands around our current priority projects into one survey would probably be best.

Similarly some felt a quick update to the VDS would be the best next step, others felt a more thoroughgoing rewrite as a Parish Design Statement would now be appropriate, and some suggested maybe the former, followed later by the latter…

Consideration of a Neighbourhood Plan